Rugby league is one of the most popular sports in Australia. It is the dominant winter sport on the country's eastern seaboard, including the states of New South Wales and Queensland as well as the Australian Capital Territory.

The elite club competition is the National Rugby League (NRL), which features ten teams from New South Wales, three teams from Queensland, and one team 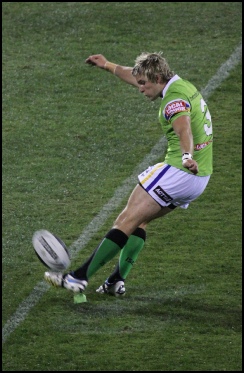 each from Victoria, Australian Capital Territory and New Zealand.

Australia has a rich history of rugby league, first taking up the sport in 1908 alongside people in Britain and New Zealand. The rule changes over the decades that have made it evolve into a different game to the existing rugby football have been partly instigated in Australia as well. The country has been dominant over the other rugby league-playing nations for many years, but enjoys a strong rivalry with New Zealand.

Commonly known "League" or simply "football", and sometimes referred to as "the greatest game of all", it is traditionally seen as a "working man's sport" with its roots in the working class communities of Northern England, compared to rugby union which has its roots in prestigious English public schools. The Australian Rugby League, the sport's governing body in Australia, is working on ways to expand rugby league's popularity across political and social borders.

The Rugby League State of Origin is an annual series of three interstate matches between the two strongest rugby league states Queensland and New South Wales. The State of Origin series is one of Australia's premier sporting events, attracting a huge television audience and usually selling out the stadiums in which the games are played. Beginning in 2012, an under 21s State of Origin match will be held annually on the same weekend as the Australia vs New Zealand test. 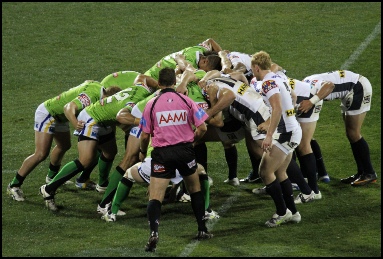 Females account for a large percentage of rugby league's viewing public and the attraction of the game for women partly accounts for rugby league's very strong position in the Australian sporting landscape. Many NRL clubs hold initiatives to foster this relationship. For instance, in 2005 the Canterbury Bulldogs staged a luncheon for 300 of Sydney's corporate women to raise funds for the Breast Cancer Foundation, as well as skills development for school girls within the Canterbury-Bankstown district.

This follows the increased number of female members to the boards of the National Rugby League and several of its clubs. Manly Sea Eagles also instituted several female directed initiatives, some of which were aimed towards further increasing female spectator numbers.

Not all the perceptions of rugby league being a mostly man game are completely true. At a junior and local level there are many women involved in volunteering positions. Women form a very important part of the local club structures. However, it is not customary for women over the age of 11 to continue playing rugby league against the boys and the exclusively women's rugby league clubs have a relatively small profile in comparison to the local boys' clubs.

Rugby league became the first mainstream professional sport in Australia to appoint a female director to a governing body, with Katie Page, the managing director of retail giant Harvey Norman, accepting an invitation to join the National Rugby League's executive board.

The Jillaroos, the Australian National Women's rugby league side, defeated 2008 Women's Rugby League World Champions New Zealand in Auckland in 2009 - thereby ending a streak of 10 years of successive defeats to the New Zealand side.