Echidnas, sometimes known as spiny anteaters, belong to the family Tachyglossidae in the monotreme order of egg-laying mammals. The four extant species, together with the platypus, are the only surviving members of that order and are the only extant mammals that lay eggs. Although their diet consists largely of ants and termites, they are no more closely related to the true anteaters of the Americas than to any other placental mammal. They live in Australia and New Guinea. The echidnas are named after a monster in ancient Greek mythology.

Echidnas are small, solitary mammals covered with coarse hair and spines. Superficially, they resemble the 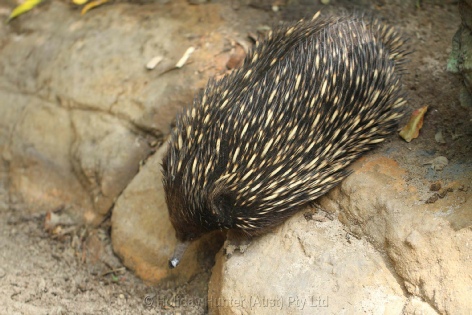 anteaters of South America and other spiny mammals such as hedgehogs and porcupines. They have elongated and slender snouts which function as both mouth and nose. Like the platypus, they are equipped with electrosensors, but while the platypus has 40,000 electroreceptors on its bill, the long-billed echidna has only 2,000, and the short-billed echidna, which lives in a drier environment, has no more than 400 located at the tip of its snout. They have very short, strong limbs with large claws, and are powerful diggers. Echidnas have tiny mouths and toothless jaws. The echidna feeds by tearing open soft logs, anthills and the like, and using its long, sticky tongue, which protrudes from its snout, to collect prey. The short-beaked echidna's diet consists largely of ants and termites, while the Zaglossus species typically eats worms and insect larvae. Long-beaked echidnas have sharp, tiny spines on their tongues that help capture their prey. Echidnas and the platypus are the only egg-laying mammals, known as monotremes.

The female lays a single soft-shelled, leathery egg 22 days after mating, and deposits it directly into her pouch. Hatching takes place after 10 days; the young echidna then sucks milk from the pores of the two milk patches (monotremes have no nipples) and remains in the pouch for 45 to 55 days, at which time it starts to develop spines. The mother digs a nursery burrow and deposits the young, returning every five days to suckle it until it is weaned at seven months.

Due to their low metabolism and accompanying stress resistance, echidnas are long-lived for their size; the longest recorded lifespan for a captive echidna is 50 years, with anecdotal accounts of wild individuals reaching 45 years. Male echidnas have non-venomous spurs on the hind feet.