The kangaroo is a marsupial from the family Macropodidae (macropods, meaning 'large foot'). In common use the term is used to describe the largest species from this family, especially those of the genus Macropus, red kangaroo, antilopine kangaroo, eastern grey kangaroo and western grey kangaroo. Kangaroos are endemic to Australia. The smaller macropods are found in Australia and New Guinea.

Kangaroos have large, powerful hind legs, large feet adapted for leaping, a long muscular tail for balance, and a small head. Like most marsupials, female kangaroos have a pouch called a marsupium in which joeys complete postnatal development. 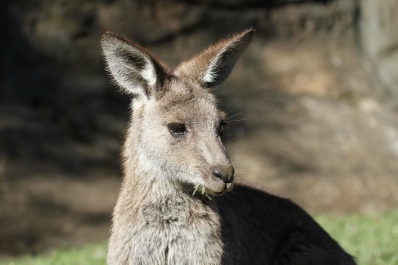 Larger kangaroos have adapted better to changes brought to the Australian landscape by humans and though many of their smaller cousins are endangered, they are plentiful. They are not farmed to any extent, but wild kangaroos are shot for meat, leather hides, and to protect grazing land for sheep and cattle. Although there is some controversy, harvesting kangaroo meat has many environmental and health benefits over traditional meats.

The kangaroo is an unofficial symbol of Australia, and appears as an emblem on the Australian coat of arms, on some of its currency, and is used by some of Australia's well known organisations, including Qantas and the Royal Australian Air Force. The kangaroo is important to both Australian culture and the national image, and consequently there are numerous popular culture references.

Kangaroos are the only large animals to use hopping as a means of locomotion. The comfortable hopping speed for a red kangaroo is about 20–25 km/h (13–16 mph), but speeds of up to 70 km/h (44 mph) can be attained over short distances, while it can sustain a speed of 40 km/h (25 mph) for nearly 2 km (1.2 mi). This fast and energy-efficient method of travel has evolved because of the need to regularly cover large distances in search of food and water, rather than the need to escape predators.To move at slow speeds, it uses its tail to form a tripod with its two forelimbs, then raises its hind feet forward. Kangaroos are adept swimmers, and often flee into waterways if threatened by a predator. If pursued into the water, a kangaroo may use its forepaws to hold the predator underwater so as to drown it.

Kangaroos have chambered stomachs similar to those of cattle and sheep. They regurgitate the vegetation they have eaten, chew it as cud, and then swallow it again for final digestion. Different species of kangaroos have different diets, although all are strict herbivores. The eastern grey kangaroo is predominantly a grazer, eating a wide variety of grasses, whereas some other species (e.g. the red kangaroo) include significant amounts of shrubs in their diets. The smaller species of kangaroos also consume hypogeal fungi. Many species are nocturnal, and crepuscular, usually spending the days resting in shade, and the cool evenings, nights and mornings moving about and feeding.

Because of its grazing, kangaroos have developed specialised teeth. Its incisors are able to crop grass close to the ground, and its molars chop and grind the grass. Since the two sides of the lower jaw are not joined together, the lower incisors are farther apart, giving the kangaroo a wider bite. The silica in grass is abrasive, so kangaroo molars move forward as they are ground down, and eventually fall out, replaced by new teeth that grow in the back.