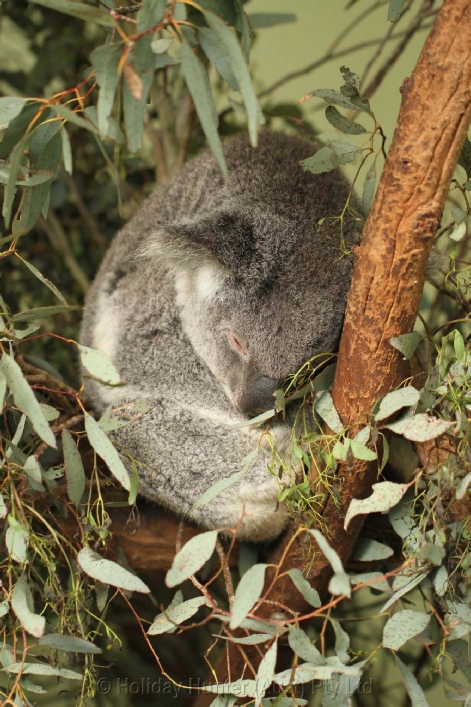 The koala is an arboreal herbivorous marsupial native to Australia, and its closest living relatives are the wombats. The koala is found in coastal areas of the mainland's eastern and southern regions, inhabiting Queensland, New South Wales, Victoria and South Australia. It is easily recognisable by its stout, tailless body, round, fluffy ears and large, spoon-shaped nose. It is popularly known outside Australia as the koala bear because of its bear-like appearance. The koala has a body length of 60–85 cm (24–33 in) and weighs 4–15 kg (9–33 lb). Pelage colour ranges from silver grey to chocolate brown. Koalas from the northern populations are typically smaller and lighter in colour than their counterparts further south. It is possible that these populations are separate subspecies, but this is disputed.

Koalas typically inhabit open Eucalyptus woodlands, and the leaves of these trees make up most of their diet. Because this eucalypt diet provides them with only low nutrition and energy, koalas are largely sedentary and sleep for up to 20 hours a day. They are asocial animals, and bonding only exists between mothers and dependent offspring. Adult males communicate with loud bellows that intimidate rivals and attract mates. Males mark their presence with secretions from their chest glands. Being marsupials, koalas give birth to underdeveloped young that crawl into their mothers' pouches, where they stay for the first six to seven months of their life. These young koalas are known as joeys, and are fully weaned at around a year. Koalas have few natural predators and parasites but are threatened by various pathogens, like Chlamydiaceae bacteria and the koala retrovirus, as well as bush fires and droughts.

Koalas play an important role in the culture of indigenous Australians. The first recorded encounter between a European and a koala was in 1798, and an image of the animal was published in 1810 by naturalist George Perry. Botanist Robert Brown wrote the first detailed scientific description of the koala in 1814, although his work remained unpublished for 180 years. Popular artist John Gould illustrated and described the koala, introducing the species to the general British public. Further details about the animal's biology were revealed in the 1800s by several English scientists. Because of its distinctive appearance, the koala is recognised worldwide as an iconic symbol of Australia. Koalas are listed as of Least Concern by the International Union for Conservation of Nature. The Australian government, however, lists populations in Queensland and New South Wales as Vulnerable. The animal was hunted heavily in the early 20th century for its fur, and large-scale culling in Queensland resulted in a public outcry that initiated a movement to protect the species. Sanctuaries were established, and translocation efforts moved koalas whose habitat had become fragmented or reduced to new regions. The biggest threat to their existence is habitat destruction due to agriculture and urbanisation.