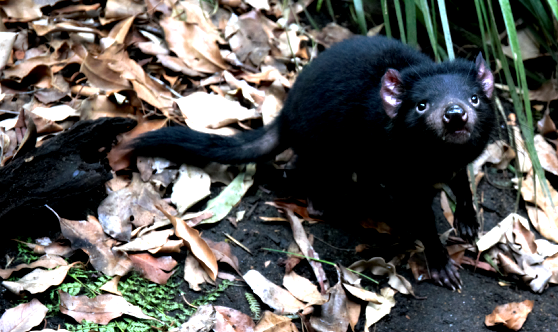 The Tasmanian devil  is a carnivorous marsupial of the family Dasyuridae, now found in the wild only on the Australian island state of Tasmania. The size of a small dog, it became the largest carnivorous marsupial in the world following the extinction of the thylacine in 1936. It is characterised by its stocky and muscular build, black fur, pungent odour, extremely loud and disturbing screech, keen sense of smell, and ferocity when feeding. The Tasmanian devil's large head and neck allow it to generate amongst the strongest bite per unit body mass of any extant mammal land predator, and it hunts prey and scavenges carrion as well as eating household products if humans are living nearby. Although it usually is solitary, it sometimes eats with other devils and defecates in a communal location. Unlike most other dasyurids, the devil thermoregulates effectively and is active during the middle of the day without overheating. Despite its rotund appearance, the devil is capable of surprising speed and endurance, and can climb trees and swim across rivers.

It is believed that ancient marsupials migrated from what is now South America to Australia tens of millions of years ago during the time of Gondwana, and that they evolved as Australia became more arid. Fossils of species similar to modern devils have been found, but it is not known whether they were ancestors of the contemporary species, or whether the current devils co-existed with these species. The date that the Tasmanian devil became locally extinct from the Australian mainland is unclear; most evidence suggests they had contracted to three relict populations around 3000 years ago. This disappearance is usually blamed on dingoes, which are absent from Tasmania. Because they were seen as a threat to livestock and animals that humans hunted for fur in Tasmania, devils were hunted and became endangered. In 1941, the devils, which were originally seen as implacably vicious, became officially protected. Since then, scientists have contended that earlier concerns that the devils were the most significant threat to livestock were overestimated and misplaced.

Devils are not monogamous, and their reproductive process is very robust and competitive. Males fight one another for the females, and then guard their partners to prevent female infidelity. Females can ovulate three times in as many weeks during the mating season, and 80% of two-year-old females are seen to be pregnant during the annual mating season.

Females average four breeding seasons in their life and give birth to 20–30 live young after three weeks' gestation. The newborn are pink, lack fur, have indistinct facial features and weigh around 0.20 g (0.0071 oz) at birth. As there are only four nipples in the pouch, competition is fierce and few newborns survive. The young grow rapidly and are ejected from the pouch after around 100 days, weighing roughly 200 g (7.1 oz). The young become independent after around nine months, so the female spends most of her year in activities related to childbirth and rearing.

Since the late 1990s, devil facial tumour disease has drastically reduced the devil population and now threatens the survival of the species, which in 2008 was declared to be endangered. Programs are currently being undertaken by the Government of Tasmania to reduce the impact of the disease, including an initiative to build up a group of healthy devils in captivity, isolated from the disease. While the thylacine was extant it preyed on the devil, which targeted young and unattended thylacine cubs in their dens. Localised populations of devils have also been severely reduced by collisions with motor vehicles, particularly when they are eating roadkill.

The devil is an iconic symbol of Tasmania and many organisations, groups and products associated with the state use the animal in their logos. It is seen as an important attractor of tourists to Tasmania and has come to worldwide attention through the Looney Tunes character of the same name.

Due to export restrictions and the failure of overseas devils to breed, there are almost no devils outside Australia except for any that have been illegally smuggled.