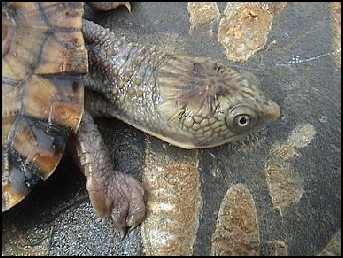 The Saw-shelled turtle or Myuchelys latisternum, is a species of turtle in the Chelidae family. It is endemic to Australia, ranging along rivers and streams and connected swamps and lagoons from coastal Cape York Peninsula to northern New South Wales, with populations also noted as far south as Newcastle - (Williams River Catchment site of the former Tilligra Dam). They are thought to have been introduced to Lake Eacham in the Atherton Tablelands. Other common English names are: Serrated snapping turtle, or Common sawshell turtle.

The female is considerably larger than the male with a carapace up to 28 cm long compared to the males which rarely get bigger than about 18 cm. The carapace is roughly oval and broad at the rear. They are not usually aggressive, but can bite fiercely. They can also emit a strong smell.

The shell has marginal serrations which are the reason for its common name, the "Saw-shelled turtle". It retains some of these serrations throughout its life. "The head shield extends down the side of the head to just above the tympanum, and the top of the neck has prominent pointed tubercules (many of these with an apical sensory pit)."

The Saw-shelled turtle is carnivorous and feeds on fish, tadpoles, frogs, aquatic insects and is one of the few native Australian animals successful in preying on the introduced and very poisonous Cane Toads (Bufo marinus). Toads too large to swallow whole are first shredded with their front claws.

Like many other aquatic turtles, saw-shelled turtle is able to obtain oxygen from water through skin, cloaca and buccopharyngeal cavity, thus extending its ability to stay underwater for prolonged periods.