The first British settlement led by Captain Arthur Phillip, who assumed the role of governor of the settlement on arrival in 1788, until 1792. During this time New South Wales was an entirely penal colony.

After years of chaos, anarchy and the overthrow of Governor William Bligh, a new governor, Lieutenant-Colonel (later Major-General) Lachlan Macquarie, was sent from Britain to reform the settlement in 1809.

During his time as governor, Macquarie commissioned the construction of roads, wharves, churches and public buildings, sent explorers out from Sydney and employed a planner to design the street layout of Sydney. Macquarie's legacy is still evident today.

During the 19th century, large areas were successively separated to form the British colonies of Tasmania (proclaimed as separate colony named Van Diemen's Land in 1825), South Australia (1836), New Zealand (1841), Victoria (1851) and Queensland (1859). Responsible government was granted to the New South Wales colony in 1855.

At the end of the 19th century, the movement toward federation between the Australian colonies gathered momentum. Conventions and forums involving colony leaders were held on a regular basis. 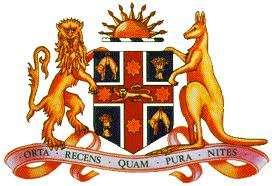 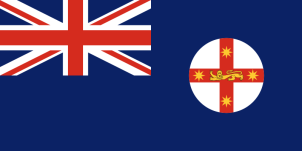 Proponents of NSW as a free trade state were in dispute with the other leading colony Victoria, which had a protectionist economy. At this time customs posts were common on borders.

Travelling from NSW to Victoria in those days would have been very similar to travelling from NSW to New Zealand today. Supporters of federation included the NSW premier Sir Henry Parkes whose 1889 Tenterfield Speech (given in Tenterfield) was pivotal in gathering support for NSW involvement. Edmund Barton, later to become Australia's first Prime Minister, was another strong advocate for federation and a meeting held in Corowa in 1893 drafted an initial constitution.

In 1898 popular referendums on the proposed federation were held in NSW, Victoria, South Australia and Tasmania. All votes resulted in a majority in favour, but the NSW government under Premier George Reid (popularly known as "yes–no Reid" because of his constant changes of opinion on the issue) had set a requirement for a higher "yes" vote than just a simple majority which was not met.

In 1899 further referendums were held in the same states as well as Queensland (but not Western Australia). All resulted in yes votes with majorities increased from the previous year. NSW met the conditions its government had set for a yes vote. As a compromise to the question on where the capital was to be located, an agreement was made that the site was to be within NSW but not closer than 100 miles (161 km) from Sydney, while the provisional capital would be Melbourne. Eventually the area that now forms the Australian Capital Territory was ceded by NSW when Canberra was selected.

Telopea speciosissima, was proclaimed the official floral emblem of New South Wales on 24 October 1962. Robert Brown (1773-1858) named the genus Telopea in 1810 from specimens collected in the Blue Mountains, west of Sydney. Sir James Smith (1759-1828), a noted botanist and founder of the Linnaean Society in England, wrote in 1793:  'The most magnificent plant which the prolific soil of New Holland affords is, by common consent, both of Europeans and Natives, the Waratah.’

The platypus (Ornithorhynchus anatinus) is a semi-aquatic mammal endemic to eastern Australia, including Tasmania. Together with the four species of echidna, it is one of the five extant species of monotremes, the only mammals that lay eggs instead of giving birth to live young.

It is the sole living representative of its family (Ornithorhynchidae) and genus (Ornithorhynchus), though a number of related species have been found in the fossil record.

The bizarre appearance of this egg-laying, venomous, duck-billed, beaver-tailed, otter-footed mammal baffled European naturalists when they first encountered it, with some considering it an elaborate fraud. It is one of the few venomous mammals, the male platypus having a spur on the hind foot that delivers a venom capable of causing severe pain to humans. The unique features of the platypus make it an important subject in the study of evolutionary biology and a recognisable and iconic symbol of Australia; it has appeared as a mascot at national events and is featured on the reverse of the Australian 20 cent coin.

Kookaburras are best known for their unmistakable call, which sounds uncannily like loud, echoing human laughter They are generally not closely associated with water, and can be found in habitats ranging from humid forest to arid savanna, but also in suburban and residential areas near running water and where food can be searched for easily.

The blue groper is a species of fish found in the coastal waters of southern Australia, distinguished by the bright blue colouring of the adult males. The Eastern blue groper (Achoerodus viridis) is found from Hervey Bay in southern Queensland to Wilsons Promontory in Victoria.