The Australian Capital Territory, often abbreviated ACT, is the capital territory of the Commonwealth of Australia and is the smallest self-governing internal territory. It is enclaved within New South Wales and is regularly referred to as Australia's 'Bush Capital'.

The need for a National Territory was flagged by colonial delegates during the Federation conventions of the late 19th century. Section 125 of the Australian Constitution provided that following Federation in 1901, land would be ceded freely to the new Federal Government.

The territory was transferred to the Commonwealth by the state of New South Wales in 1911, two years prior to the naming of Canberra as the National Capital in 1913.

The ACT has internal self-government, but Australia's Constitution does not afford the territory government the full legislative independence provided to Australian states. Laws are made in a 17-member Legislative Assembly that has all state and local government functions. However, its decisions can be overruled by the Australian Governor-General (effectively by the national government) under section 35 of the Australian Capital Territory (Self-Government) Act 1988.

Members of the Legislative Assembly are elected via the Hare Clarke system. The ACT Chief Minister is elected by members of the ACT Assembly. The ACT Government is a member of the Council of Australian Governments.

Unlike other self-governing Australian territories (e.g. Norfolk Island, Northern Territory etc), the ACT does not have an Administrator.

The Crown is represented by the Governor-General in the government of the ACT. The Chief Minister performs many of the roles that a state governor normally holds in the context of a state, however the Speaker of the Legislative Assembly gazettes the laws and summons meetings of the Assembly.

In Australia's Federal Parliament, the ACT is represented by four federal members: two members of the House of Representatives; the Division of Fraser and the Division of Canberra and is one of only two territories to be represented in the Senate, with two Senators (the other being the Northern Territory). The Member for Fraser and the ACT Senators also represent the constituents of the Jervis Bay Territory.

The ACT retains a small area of territory on the coast on the Beecroft Peninsula, consisting of a strip of coastline around the northern headland of Jervis Bay (not to be confused with the Jervis Bay Territory, which is on the southern headland of the Bay). The ACT's land on the Beecroft Peninsula is an "exclave", that is, an area of territory not physically connected to the main part of the ACT. Interestingly, this ACT exclave surrounds a small exclave of NSW territory, namely the Point Perpendicular lighthouse which is at the southern tip of the Beecroft Peninsula. The lighthouse and its grounds are New South Wales territory, but cut off from the rest of the state by the strip of ACT land. This is a geographic curiosity: an exclave of NSW land enclosed by an exclave of ACT land.

is an Australian wildflower from the Campanulaceae family. It grows in high rainfall areas in the Australian Alps, in environs ranging from shady roadside cuttings on Mount Hotham to full sun herbfields on the main range.

W. gloriosa has small dark green leaves in rosettes, to 2 cm. The flowers are a deep blue/purple colour, and are very eyecatching. It grows as a suckering herb.

is found in the cooler and wetter forests and woodlands of Australia, particularly alpine bushland. Mostly mild grey in colour with some lighter scalloping (more pronounced and buffish in females) the male has a red head and crest, while the female has a small fluffy grey crest. It ranges throughout south-eastern Australia and Tasmania. It is easily identified by its distinctive call, which is described as resembling a creaky gate, or the sound of a cork being pulled from a wine bottle. 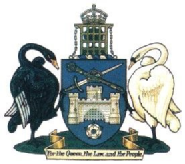