The history of Queensland spans thousands of years, encompassing both a lengthy indigenous presence, as well as the eventful times of post-European settlement.

Estimated to have been settled by Indigenous Australians approximately 40,000 years ago, the north-eastern Australian region was explored by Dutch, Portuguese and French navigators before being encountered by Captain James Cook in 1770.

The Australian Labor Party has its origin as a formal organisation in Queensland and the town of Barcaldine is the symbolic birthplace of the party.

The state has witnessed frontier warfare between European settlers and Indigenous inhabitants, as well as the employment of cheap Kanaka labour sourced from the South Pacific. June 2009 marked the 150 anniversary of its creation as a separate colony from New South Wales.

A rare record of early settler life in north Queensland can be seen in a set of ten photographic glass plates taken in the 1860s by Richard Daintree, in the collection of the National Museum of Australia

Queensland, in preparation for its 1959 Centenary, sought advice what native species would be a good floral emblem. Specifically, the government was looking for an easily grown species found only in Queensland, which was decorative, distinctive, and close to the State colour, maroon. The Cooktown Orchid, which meets these criteria, was one of the four initial suggestions, the others being the Red Silky Oak (Grevillea banksii), the Umbrella Tree (Brassaia (now Schefflera) actinophylla), and the Wheel-of-Fire (Stenocarpus sinuatus).

The koala is found in coastal regions of eastern and southern Australia, from Adelaide to the southern part of Cape York Peninsula. Populations also extend for considerable distances inland in regions with enough moisture to support suitable woodlands. The koalas of South Australia were largely exterminated during the early part of the 20th century, but the state has since been repopulated with Victorian stock. The koala is not found in Tasmania or Western Australia.

The word koala comes from the Dharuk gula. The word is erroneously said to mean "doesn't drink" Although this is not the case

The scientific name of the koala's genus, Phascolarctos, is derived from Greek phaskolos "pouch" and arktos "bear". Its species name, cinereus, is Latin and means "ash-coloured".

Although the koala is not a bear, English-speaking settlers from the late 18th century first called it koala bear due to its similarity in appearance to bears. Although incorrect, the name koala bear is still in use today outside Australia and is discouraged because of the inaccuracy in the name.

formerly known as the "Native Companion", is a bird in the crane family. The bird has also been given the name "Australian Crane", a term coined in 1865 by well-known ornithological artist John Gould in his Birds of Australia.

The Brolga is a common gregarious wetland bird species in tropical and eastern Australia, well known for its intricate mating dance.

The Barrier Reef Anemonefish was officially named as the state aquatic emblem of Queensland in March, 2005. 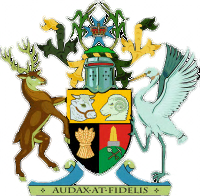