The first recorded European sighting of the South Australian coast was in 1627 when the Dutch ship the Gulden Zeepaert, captained by Francois Thijssen, sailed the coastline. The coastline of South Australia was first mapped by Matthew Flinders and Nicolas Baudin in 1802.

The land which now forms the state of South Australia was claimed for Britain in 1788 as part of the colony of New South Wales. Although the new colony included almost two thirds of the continent, early settlements were all on the eastern coast and only a few explorers ventured this far west.

It took more than forty years before any serious proposal to establish settlements in the south-western portion of New South Wales were put forward. In 1834, the British Parliament passed the South Australia Act 1834 (Foundation Act), which enabled the province of South Australia to be established. The act stated that 802,511 square kilometres (309,851 sq mi) would be allotted to the colony and it would be convict-free. In contrast to the rest of Australia, terra nullius did not apply to the new province. The Letters of Patent attached to the Act acknowledged Aboriginal ownership and stated that no actions could be undertaken that would affect the rights of any Aboriginal natives of the said province to the actual occupation and enjoyment in their own persons or in the persons of their descendants of any land therein now actually occupied or enjoyed by such natives.

Settlement of seven vessels and 636 people was temporarily made at Kingscote on Kangaroo Island, until the official site of the colony was selected where Adelaide is currently located. The first immigrants arrived at Holdfast Bay (near the present day Glenelg) in November 1836, and the colony was proclaimed on 28 December 1836, now known as Proclamation Day. South Australia is the only Australian state to be settled entirely by free settlers.

is an Australian plant in the genus Swainsona, named after English botanist Isaac Swainson, famous for its distinctive blood-red leaf-like flowers, each with a bulbous black centre, or "boss". It is one of Australia's best known wildflowers. It is native to the arid regions of central and north-western Australia, and its range extends into all mainland Australian states with the exception of Victoria

is one of three species of wombats. It is found in scattered areas of semi-arid scrub and mallee from the eastern Nullarbor Plain to the New South Wales border area. It is the smallest of all three wombat species. The young often do not survive dry seasons.

is the emblematic bird that appears on South Australia's flag, State Badge and Coat of Arms. The bird appears "displayed proper" with its wings outstretched and curved upwards. Although the image of the piping shrike is readily identified with South Australia, the bird in its own right has never been formally adopted as a faunal or bird emblem of the state.

The Piping Shrike first appeared on the State Badge which was proclaimed in 1904. The original drawing was by Robert Craig of the School of Arts. A later version drawn by H. P. Gill, who was the Principal of the School of Arts, was produced in 1910. The badge design, which set the bird against a backdrop of a yellow rising sun, was incorporated into the state flag (1904) and the Coat of Arms (1984).

Because the name Piping Shrike is not currently used to identify any bird, there has been some confusion over what bird it represents. While some think it resembles the "Murray Magpie" (Grallina cyanoleuca) government sources identify the bird as the White-backed Magpie (Gymnorhina tibicen telonocua formerly Gymnorhina tibicen leuconota).

The connection of this bird to the name Piping Shrike can be seen in this early observation by explorer Charles Sturt in the 1840s:

is a marine fish in the family Syngnathidae, which also includes the seahorses. It is the only member of the genus Phycodurus. It is found along the southern and western coasts of Australia. The name is derived from the appearance, with long leaf-like protrusions coming from all over the body. These protrusions are not used for propulsion; they serve only as camouflage. The leafy seadragon propels itself by means of a pectoral fin on the ridge of its neck and a dorsal fin on its back closer to the tail end. These small fins are almost completely transparent and difficult to see as they undulate minutely to move the creature sedately through the water, completing the illusion of floating seaweed. 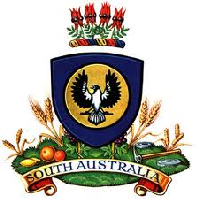 The plan for the colony was that it would be the ideal embodiment of the best qualities of British society, that is, no religious discrimination or unemployment and, as it was believed that this would also result in very little crime, no provision was made for a gaol. In early 1838 the colonists became concerned after it was reported that convicts who had escaped from the eastern states may make their way to South Australia. The South Australia Police was formed later that year to protect the community and enforce government regulations and the first gaol, a two roomed hut, was opened on 1 January 1839.

The current flag of South Australia was adopted on 13 January 1904, and is a British blue ensign with the state badge. The badge is described as a Piping Shrike with wings outstretched on a yellow disc. The state badge is believed to have been designed by Robert Craig of Adelaide's School of Design.

South Australia granted restricted women's suffrage in 1861, and in 1895 became the second place in the world to grant universal suffrage (after New Zealand), and the first where women had the dual rights to vote and to stand for election.