The coin was introduced into circulation on 14 February 1966. In its first year of minting, 30 million were struck at the British Royal Mint (then in London) in addition to 45.4 million at the Royal Australian Mint in Canberra. Since then, the coin has been produced exclusively at Canberra, apart from in 1981. In that year, 50.3 million were produced at the Royal Mint's new headquarters in Llantrisant, Wales; as well as 50 million from the Royal Canadian Mint in Winnipeg in addition to 62 million from Canberra.

The reverse side depicts an Echidna and the obverse side the head of state, Queen Elizabeth II.

There are no commemorative coins for this denomination. This coin has the highest mintage of any current coins and doesn't circulate well because of its value, like the one-euro cent.

There has been some debate about removing this coin from circulation, like in the New Zealand dollar mainly as stated for its low value and high costs. On 23 May 2009 Fairfax newspapers reported that the Royal Australian Mint planned to scrap the coin.

In May 2007, owing to the high market value of copper and nickel, the bullion value of the coin was about 6.5 cents, though there were no reported cases of hoarding or melting down of the coins despite the apparent 30% gross profit to be made from doing so. Market prices at October 2008 were about $7/kg for copper and $17/kg for nickel - making the metal content of the 5 c coin worth only 2.7 c or 54% of its face value (the same as for a 10 c or 20 c coin). Base-metal prices have dropped further since. 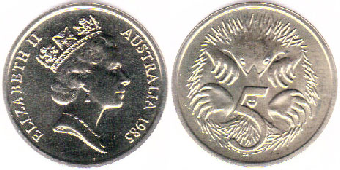