The Australian ten-cent coin is a coin of the Australian dollar. It was the fourth-lowest denomination coin when the dollar was introduced on 14 February 1966. Since the demonetisation of one and two cent coins in 1992, it is now the second-lowest denomination coin in circulation. When the dollar was introduced as half of a pound, it inherited the specifications of the pre-decimal shilling as both were worth one twentieth of an Australian pound.

The first year of minting, 1966, saw 30 million produced at the British Royal Mint (then in London) as well as 11 million struck at the Royal Australian Mint in Canberra. Since then, the coins have been produced exclusively at Canberra, apart from in 1981 when 40 million from the Royal Mint's new headquarters in Llantrisant, Wales supplemented 76.1 million from Canberra.

The image of a male Superb Lyrebird (Menura novaehollandiae)is displayed on the reverse, as the female has less striking tail features. The Superb Lyrebird is unique to the southeastern states of Australia and has also been introduced to Tasmania. The image was designed by Stuart Devlin, who designed the reverses of all coins of the Australian dollar introduced in 1966. 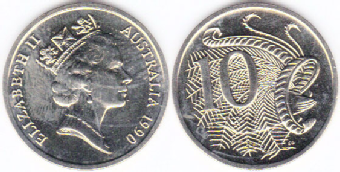