Three different obverses have so far been used; 1966 to 1984 the head of Queen Elizabeth II by Arnold Machin; between 1985 and 1998 the head by Raphael Maklouf; and since 1999 the head by Ian Rank-Broadley. Inscription of AUSTRALIA on the right hand side and ELIZABETH II on the left hand side. 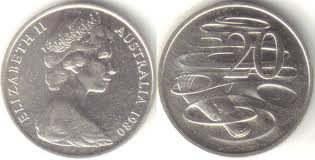 Excepting commemorative varieties, there have been a number of varieties of regular issue coins identified by collectors, of both the obverse and reverse. The first of these seen is a highly prized variety of the 1966 issue, with a "wave" on the top of the bottom stroke of the 2 in "20". These coins are now sold for over $200, depending on condition. Other varieties sited of the obverse generally revolve around the length and number of the claws of the platypus. These are prone to changing if incorrect stamping pressure is used in creation of dies for the coins. Consequentially, these are often seen in coins produced at foreign mints.

For the Broadley head Reverse there are three issues: 1999 with thicker lettering, 2000-2003 slightly reduced lettering by 0.01 mm. The 2004 issue had two forms, a reduced head all around by 2 mm and A's with flat top and thicker lettering, and the issue of 2000-03. Both were issued for circulation, but only the later in mint packs. 2005 and subsequent issues have seen a reversion to the 2000 series Reverse.

There are also some commemorative 20 cent coins.

In 1981, a large number of 20 cent coins were required, far over the capacity of the Royal Australian Mint facility in Canberra, leading to some coins being minted by other Commonwealth Mints, such as the Royal Mint in London, and the Royal Canadian Mint. In Australian Coin Collecting circles, the Canadian impression of the 20 cent coin is known as the "Ottawa Mint" version, which may be misleading, as post 1976, the Ottawa Mint only produced precious metal commemorative coins, like the Perth Mint, meaning the coins may have been produced at the Royal Canadian Mint's Winnipeg facilities.

Due to differences in the milling and annealing process, the Canadian variety of the 1981-20 cent coin is distinctive to attentive collectors and even cash handlers. The top and bottom edges of the milling is rounded over, not squared like the Australian and London varieties, and despite being in circulation for well over 25 years, even when well worn, the fields remain shiny, and not dulled like those produced at other mints. These qualities are also observed in Canadian coinage of similar ages.

The quantity of 1981 and 1982 mintages of the 20 cent coin was sufficient to not require many coins released for circulation until 1990. The 1983 and 1984 versions were struck for circulation, but never released, later being resmelted by the Royal Australian Mint, leaving the coins relatively rare. Significant premiums have been paid for a small number of mint rolls from these years that have shown up in auctions.