The round fifty cent coin was the highest-denomination and largest diameter coin of the Australian dollar's decimal coins, introduced in 1966. Due to large amounts made in 1966 and the rising cost of silver, it was not made in any other year. It was replaced by a dodecagonal 50 cent coin in 1969, which retained its reverse of the Australian Coat of Arms.

It was made of 80% silver and 20% copper, but as the value of a free-floating silver price became higher, the coins' bullion value became more valuable than their face value and so were withdrawn from circulation. A total of 36.45 million coins were minted with 14 million put into circulation. 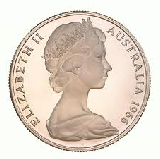 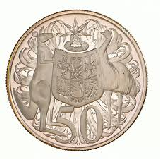