It is by diameter the largest Australian coin currently issued and second largest after the Crown of 1937–38. Originally the coin was made of 80% silver and 20% copper (round fifty cents), but as the value of a free-floating silver price became higher, the coins' bullion value became more valuable than their face value and so were withdrawn from circulation. Many commemorative coins have been issued due to their large size allowing for a better image with more content. 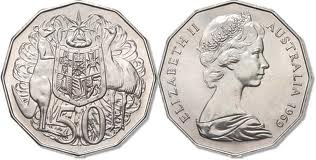