The Australian 2 dollar coin is the highest-denomination coin of the Australian dollar. It was first issued on 20 June 1988, having been in planning since the mid-1970s. It replaced the Australian two-dollar note due to having a longer circulatory life.

In accordance with all other Australian coins, the obverse features the portrait of the reigning monarch, who during the lifetime of the coin has only been Queen Elizabeth II. From 1988 to 1998 the portrait of her was by Raphael Maklouf before being replaced in the following year by one sculpted by Ian Rank-Broadley.

Designed by Horst Hahne, the reverse depicts an Aboriginal Elder, inspired by an Ainslie Roberts drawing of Gwoya Jungarai, known as One Pound Jimmy. However, the design is not intended to depict any person in particular. The design also incorporates the Southern Cross and native grasstrees. The initials of its designer, Horst Hahne, were removed from the design from 1990 onwards.

All two-dollar coins have been struck at the Royal Australian Mint in Canberra. 160.9 million coins were minted in the first year of issue. It has been issued in all years since except 1991, with an average mintage of 22 million coins per annum from 1989 to 2008. There have been no commemorative designs for this issue, only the standard design.

When the coin was introduced there were complaints that the coin was too small for its value and was easily lost, or counterfeited by placing two 5 cent pieces together and colouring them gold. However, with an uninterrupted milling on the 5 cent and the 2 dollars having 5 grooves in 4 lots separated by 7mm length of the side, identification is easy. It has the same size and milling as the 10 Swedish kronor.

Its smaller size in comparison to the $1 coin can lead to confusion for visitors from outside Australia. 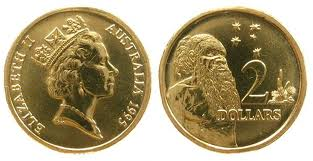