The Australian one dollar note was introduced in 1966 to replace the 10 shilling note due to decimalisation. The note was issued from its introduction in 1966 until its replacement by the dollar coin in 1984. Approximately 1.7 billion one dollar notes were printed. 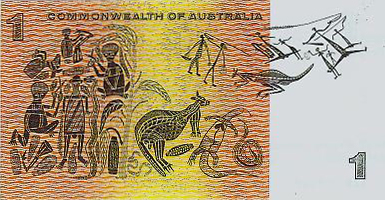 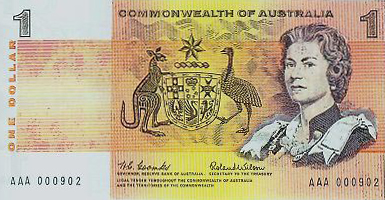 During the note's issue, between its introduction and 1974, The note bore "Commonwealth of Australia" as the identification of country. At least 680,000,000 notes were printed in this time period. After 1974 and until the dollar coin was introduced in 1984, the note bore "Australia" as its identification of country. Around 1,020,000,000 such notes were printed after 1974.

The Australian one dollar note was designed by Gordon Andrews, the design being accepted in April 1964. The note features Her Majesty Queen Elizabeth II on the obverse with the Australian Coat of Arms. This portrait was based on a photo taken by Douglas Glass. The obverse of the note features Aboriginal Contemporary Art created by David Malangi.

The paper design included a watermark of Captain James Cook in the white field; the watermark was also used in the last issue of pound banknotes. A metallic strip, first near the centre of the note, then from 1976 was moved to the left side on the obverse of the note.

The one dollar note was replaced by the current gold-coloured coin on 13 May, 1984 due to the longer service life and cost effectiveness of coins. These notes can be redeemed at face value by the Reserve Bank of Australia. but numismatics and note collectors may pay a higher price for these notes depending on age and condition.