The Australian ten dollar banknote was issued when the currency was changed from the Australian pound to the Australian dollar on 14 February 1966; it replaced the £5 note which had the same blue colouration.

Since the start of issue of $10 notes, there have been eleven signature combinations, of which the 1967 issue is the most valued. It was issued for one year only, along with the Coombs/Wilson issue of 1966.

From 1966-1974 the main title identifying the country was Commonwealth of Australia; there were 470,000,000 notes issued in this period. This was subsequently changed to Australia until the end of issue of paper currency for this denomination in 1993, with 1,265,959,091 of these notes being printed.

The people depicted on the paper note issue were Francis Greenway on the obverse along with public building he helped construct, and Henry Lawson on the reverse with his poetry and scenes of the outback gold mining town of Gulgong in the 19th century including the Times Bakery. 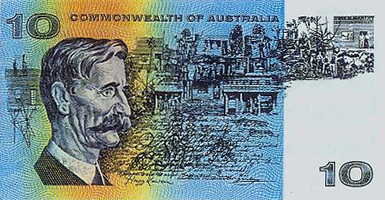 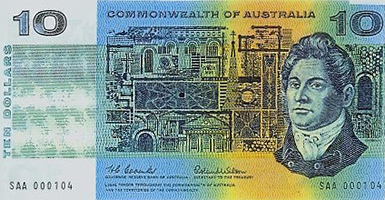