The Australian twenty dollar banknote was issued when the currency was changed from the Australian pound to the Australian dollar on 14 February 1966. It replaced the £10 note which had the same orange colouration. With a distinct orange background, the note is often called a "lobster".

Since the start of issuance there have been 14 signature combinations, of which the 1967 issue is of the greatest value, issued for one year only; and the 1989 Pillip/Fraser being issued for less than a year.

From 1966-1974 the main title identifying the country was Commonwealth of Australia, there were 146,960,000 notes issued in its life. This was subsequently changed to Australia until the end of the issuance of paper currency for this denomination in 1994 with 1,661,970,048 of these notes being issued.

The people depicted on the paper note issue were Charles Kingsford Smith on the obverse along with five Lissajous curves drawn by a two-pendulum harmonograph, and Lawrence Hargrave on the reverse with his drawings of kites and type aircraft designs.

Colouration is said to be red but has been debated many times over the years, some people claim it is of orange pigmentation. Official documentation states that the colour of the twenty dollar note is red. 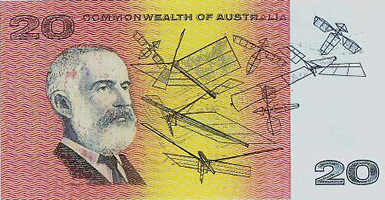 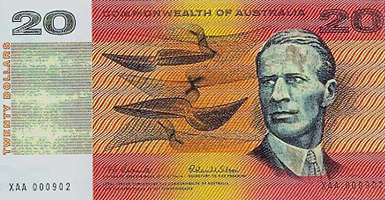