In the initial design, a $2 polymer was envisaged but in 1988 the $2 note was discontinued and replaced by a coin. The intended $2 polymer design was transferred to the $5 polymer.

On 22nd May, 1990, the Reserve Bank of Australia (RBA) announced that the major design elements of the new $5 polymer would be a portrait of Her Majesty Queen Elizabeth II on one side and a depiction of Parliament House Canberra on the other.

Originally, the new polymer $5 was to be released in May 1991. However, technical difficulties were incurred in moving to large scale production resulting in delays; the RBA made announcements in November 1990 and in May 1991 to this effect. An RBA Press release advises "The Bank judged it prudent to defer the issue and suspend production until all the technical problems had been resolved satisfactorily." Note Printing Australia (NPA) "responsible for printing the notes progressively overcame those problems and production of the $5 note recommenced in January, 1992."

Thus the first note of the polymer NNS was released on 7th July, 1992.

Bruce Stewart, the chief designer at NPA designed this note. The portrait of Queen Elizabeth II is slightly right of centre on the front of the note. At the left are the leaves of the gum tree.

Australia's new Federal Parliament on Capital Hill, Canberra, is the centrepiece on the back of the note. There is also a landscape plan. The former Parliament House, opened in 1927, is depicted along the bottom of the note.

(a) A clear window containing a gum flower which can be seen from both sides of the note.

(b) A perfect registration device which becomes apparent when the note is held up to the light in the form of a seven pointed (Commonwealth) Star within in a circle. Four points on the front of the note combine perfectly with three on the back.

(c) Micro-printing of "FIVE DOLLARS" in nine lines at the top left above the gum leaves.

(d) The Australian Coat of Arms in the under-print becoming apparent when the note is held up to the light. This acts in much the same way as a watermark. It is located at the top left but to the right of the micro-printing.

(e) One horizontal serial number at back right in Butsch Grotesque font. The colour of the serial number may vary from light green to black from note to note (see below).

(f) Multi-coloured fine line drawings on both sides of the note.

(g) When exposed to ultra-violet light, the serial number and a checkerboard to the left of centre on the back fluoresce. For those observed, there is no visible difference in the fluorescing qualities of the light green and black serial numbers. 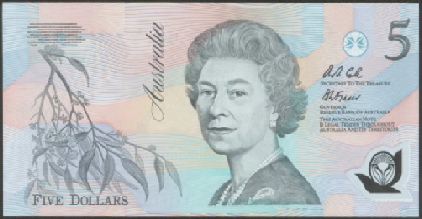 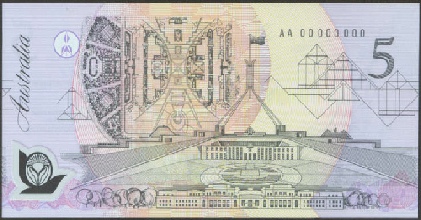 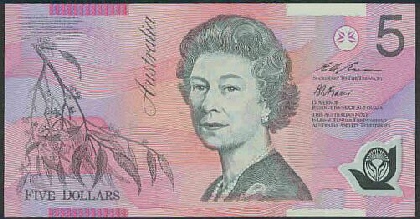 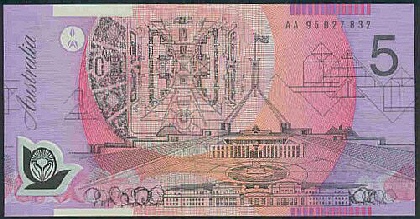 On 1st January, 2001, Australia celebrated 100 years of Federation under which the 6 self governing colonies combined to form the Commonwealth of Australia. As part of the celebrations, Australia's second commemorative note was issued – the Federation $5. It became available on 2nd January, 2001 and circulates alongside the recoloured $5 note. During 2001 formal issue of the $5 was primarily limited to the Federation $5. 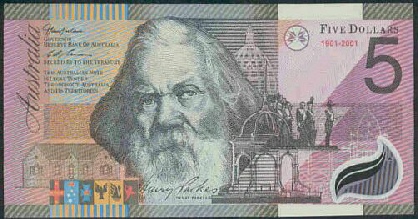 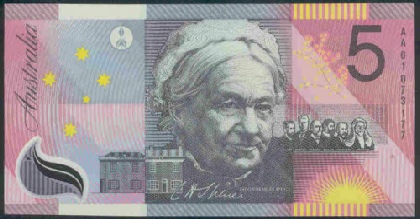 Designed by Garry Emery, the front of the note features a portrait of Sir Henry Parkes, the "Father of Federation", which is based on an 1892 painting by Tom Roberts, a leading artist of the day. To the right of Parkes, are architectural drawings of the Royal Exhibition Building in Melbourne which was the site of the first Commonwealth Parliament in 1901. Below this is a scene of the opening of Australia's First Federal Parliament based on a painting once again by Tom Roberts who was commissioned to record the opening. His Royal Highness The Duke of Cornwall and York (later to be King George V) who can be seen in the foreground, performed the honours.

At the bottom is the Federation Pavilion in Sydney's Centennial Park which was specially constructed for the celebrations. To the left of Parkes is the Tenterfield School of Arts building, the site of his rousing speech in 1889. The six State badges are at the bottom left.

Catherine Spence features on the back of this note. She was a journalist, a social reformer very active in the cause of state children, a novelist and a prominent supporter of electoral reform. Although unsuccessful, she was the first woman to run for electoral office in Australia, a candidate for the Australasian Federal Convention of 1897. To the right are portraits of prominent campaigners for Federation, one from each of the six colonies viz Clark (Tasmania), Barton (New South Wales), Forrest (Western Australia), Deakin (Victoria), Kingston (South Australia) and Griffith (Queensland). Barton became Australia's first Prime Minister, Deakin was Prime Minister on three occasions and Griffith was the first Chief Justice of the High Court.

To the left is a building of the South Australian Children's Department, Adelaide, with which Spence was closely involved for almost 40 years. A spray of wattle, a sun burst and the stars of the Southern Cross complete the back.

In keeping with the naming of the portraits, several of the scenes on this note are also named Viz "OPENING OF THE FIRST PARLIAMENT OF THE COMMONWEALTH OF AUSTRALIA ON MAY 9, 1901" is printed underneath the scene. The "STATE CHILDREN'S DEPARTMENT" building is so named as are the names of the six campaigners for Federation. Whilst in small print, it is understood that the reason for doing so is as much informational as it is a security feature.

(a) A clear window containing the embossed denomination numeral "5" which can be seen from both sides of the note. There is a mauve tint to the window.

(b) When the note is held up to the light, the seven pointed Commonwealth Star becomes visible with four points on the front registering perfectly with three on the back.

(c) An image of Parkes in the under-print (instead of the Coat of Arms as on other issues) becomes apparent at the top right on the front when the note is angled to the light.

(e) One vertical serial number in black at the right on the back in Butsch Grotesque font.

(g) Intricate, multi-coloured, fine-line patterns and images appear on each side of the note.

(h) When exposed to ultraviolet light, the serial number, the stars of the Southern Cross, the yellow orientation bars at the top and the bottom of the note and the wattle flowers fluoresce. Additionally, the denomination numeral "5" below the printed "5" on the back of the note also fluoresces. It is not visible under normal light conditions.