History was made in the world of banknotes on 27th January, 1988 when the first polymer note, a $10, was released into general circulation. This note is the brainchild of Note Printing Australia (NPA), Australia's leading security printer and the Commonwealth Scientific and Industrial Research Organisation (CSIRO), the Federal Government research institution.

It is the product of almost twenty years of research to "build a better banknote". Shortly after the decimalisation of Australia's currency in February, 1966, the Reserve Bank of Australia (RBA) became alarmed with the extent of the counterfeiting of its workhorse note, the $10. It approached the CSIRO for assistance and it together with NPA {which at the time was known as the Note Printing Branch (NPB) - of the RBA} embarked on what proved to be a ground breaking project.

Development of the polymer note was not without its difficulties. Suffice to say many obstacles were overcome such that today over 20 countries have embraced this technology. Much secrecy surrounded the development of the note and this first issue has the RBA code name "C $10", for commemorative $10. January 26 is Australia's national day (a public holiday) and in 1988, 200 years of European settlement were celebrated. Befitting the occasion, this commemorative note depicts scenes of European settlement and the general development of a multi - cultural nation on one side and on the other side Australia's aboriginal heritage.

A sophisticated Optically Variable Device (OVD) as a key security feature developed by NPB is introduced with this note in the RBA's campaign against the counterfeiters. Australia's Federal Government was also very keen that this note be issued to coincide with the commencement of the bicentennial celebrations and it is understood that production was fast tracked to meet this goal. This may have contributed to some production faults.

On 24th October, 1988 the note was re- released after a completely new printing. This release was without the previous problems; seemingly the public's curiosity had been satisfied. A significant difference between the two is that the first issue has a thin smooth varnish over the OVD whereas the second issue has a thick mottled varnish. As a commemorative, it was not intended to replace the current paper notes but was to circulate in tandem with them for about one year and to act as a test for a future generation of polymer notes.

Understandably, the authorities were keen for this technology to be successful having invested some 20 years and $20million into its development. Whilst the note was intended as a one year issue, in 1989 intensive field testing was undertaken in the Newcastle area (some 170 km north of Sydney an area traditionally used for market research because of its location and demographics). Market research was also done to measure public and professional (bank tellers, check-out operators and other high volume cash handlers) reaction to the note. These findings assisted the RBA / NPA in determining the characteristics of future polymer notes for Australia and for other countries.

Such was the birth of the worlds first polymer note.

Harry Williamson, assisted by NPB staff, designed this note. The front (the signature and "legal tender" side, also known as the "Supply" side) has the settlement theme in its design. HMS Supply and ten other ships, to become known as the "First Fleet," left Portsmouth, England, on 13th May, 1787. The fleet arrived in Botany Bay (as named by Captain Cook on his visit in 1770) on 20 January, 1788 but this location was deemed unsuitable as a permanent settlement. Six days later a settlement was established at Sydney Cove.

To the left is a representation of Sydney Cove. It is based on an engraving by Edward Dayes of a sketch by John Hunter and was first published in 1793. Hunter was a senior officer in the First Fleet, became the second Governor of the colony of New South Wales. His name is closely associated with Newcastle, the "Hunter Region" where the C$10 was field tested in 1989

In keeping with the 1984 paper $100, the serial numbers are on the back or the "Aboriginal" side. An Aboriginal youth wearing body paint is the prominent feature supported by a Morning Star Pole and rock paintings. The Morning Star Pole depicted is a reproduction of a pole created by the Aboriginal artist, Yumbulul. Such poles are used by the Aboriginal people of North - East Arnhem Land (Northern Territory), on some ceremonial occasions. At the left shoulder of the youth is a rock painting of a woman found in Deaf Adder Gorge (also in Arnhem Land). Hand prints or stencils common to many ancient rock drawings found across the country form a background pattern on the left side of the note.

A number of Aboriginal artists, including Paddy Carroll Tjungurrayi, George Milpurrurru and Banduk Marika were commissioned by RBA to assist in the design of the note. Some of their works are included in the background patterns using colours associated with the "Outback".

(a) An OVD with the image of Captain Cook which can be viewed from both sides of the note is the key security feature. Because of a diffraction effect, the OVD when angled to the light produces a rainbow pattern. A very thin aluminium coating forms the reflective surface.

(b) The OVD is surrounded by a clear see through area.

(c) A wave pattern is seen when the note is held to the light at the right front immediately below the denominational numeral "10" and at the top left again below the denomination numeral on the back. This pattern is created early in the production process being incorporated in the base polymer substrate which is subsequently covered with layers of ink and acts much like a watermark.

(d) Another first for an Australian note is the diamond shaped perfect registration device located at top left (front) and top right (back).

(e) Micro-printing of "BICENTENARY" between curved lines is seen some 25 times in whole or in part in the green background between the sails of HMS Supply.

(f) The two horizontal serial numbers (on the back of the note) are printed in a different colours and fonts. Modern Extended is used at upper left and Butsch Grotesque at lower right.

(h) When exposed to ultra-violet light, the serial number at bottom right fluoresces; that at top left does not. There is no profound difference between the dated AA variety and first and second AB releases. Fluorescence in the first AB release does not seem to be as dramatic (for those observed) as in the second release. Thus, there may have been a change in the production process causing this effect.

Dame Mary Gilmore is depicted on the back of the note - twice. Once as a young woman and in the background, a Dobell portrait of her in her later years. Gilmore was a celebrated author, poet, and social reformer campaigning for voting rights for women, relief of the poor and disadvantaged through a government welfare system and improved treatment of aborigines. In the 1890's she spent several years in a utopian community established in Paraguay.

A bullock dray with bales of wool is also shown. Images of homesteads or other outback buildings are shown at far left and right. An outback woman with a hat features as the orange merges into the blue towards the left. The profile of an extract from one of Gilmore's poems is at the extreme left: "No foe shall gather our harvest or sit on our stockyard rail".

In response to a significant number of queries from the public, RBA decided to print the names of the people depicted on its notes. Whilst each portrait is accompanied by the person's autograph in the design of the note, some are difficult to read. It also restored the pre 1984 signature order with the Governor of the Reserve Bank of Australia now preceding the Secretary to the Treasury reading from top to bottom. Given that the RBA is the issuer, it is appropriate that the signature of its Chief Executive has precedence.

It is interesting, and fitting, that Paterson is referred to by his commonly known nick name "Banjo" on this modified version whereas his signature is AB Paterson on both the original and modified notes .

(a) A clear window containing a windmill which can be seen from both sides of the note.

(b) When the note is held up to the light, the seven pointed Commonwealth Star becomes visible with four points on the front registering perfectly with three on the back.

(c) An image of the Australian Coat of Arms in the underprint can be seen when the note is angled to the light. It is on the front of the note between "Waltzing Matilda" and Patterson's portrait. Because of the colouring of the note, the image is less obvious on this note than on other denominations.

(d) The serial number is printed twice in blue on the back in differing fonts. Modern Extended is used for the upper left number and Butsch Grotesque for the lower right number.

(e) Micro-printing of extracts from the works of Patterson in a rectangular format encompassing his portrait and from the works of Gilmore to the left of her portrait. "TEN DOLLARS" is interspersed in most lines in each of these extracts.

(f) Intricate, multi-coloured fine - line patterns and images are present on each side. When exposed to ultraviolet light, the serial numbers fluoresce. 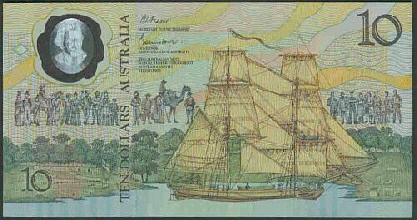 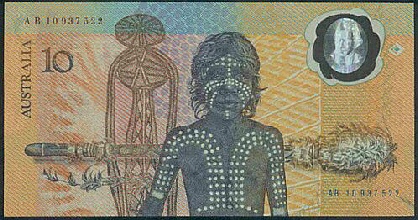 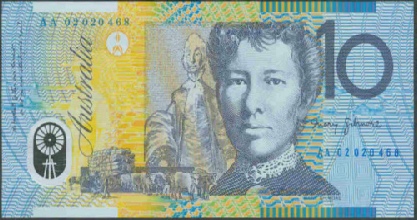