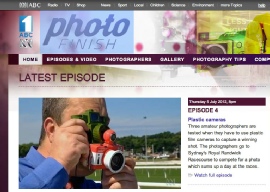 Photography is a passion for Holiday Hunter’s Laurie Davies and Scott Westlake. Most photos on the website are theirs.

In 2012, Scott featured on the ABC’s Photo Finish Television Show. The challenge for the program was to take photos at the Randwick Race Course using toy cameras and film. “Having not used film for over 20 years proved a challenge but was loads of fun”

Scott was pleased to have won this challenge.